THE SCIENCE BEHIND CBD

THE SCIENCE BEHIND CBD

It’s 2019 and we’re living longer, travelling more and doing all we can to optimise our health and wellbeing. Beyond a balanced diet and active lifestyle, a wealth of food supplements are available over-the-counter to help us do exactly that. While plant-based options are commonplace, there are perhaps none so revered – and controversial – as cannabidiol (CBD).

Anecdotal accounts and media buzz have done much to promote CBD as a wonder supplement. In spite of this, there remains a lot of confusion around what it is, how it works, and how it’s related to Cannabis as we know it.

Read on for a look at how CBD affects the body, its wellness-boosting mechanisms and what it could do for you.

What is CBD?
‘CBD is one of the two major chemical compounds found in the Cannabis plant, with the other being tetrohydrocannabinol (THC)’, explains Prof Stephens. While ‘CBD does not cause the euphoric ‘high’ associated with recreational cannabis’ – which retains high levels of THC – it can have beneficial effects on the human body. These effects include feelings of relaxation and calm.

How does it work?
‘CBD is likely to work by having a positive effect on the body’s endocannabinoid system’, according to Prof Stephens. ‘This system is made up of internal cannabinoids (endocannabinoids), cannabinoid (CB1 and CB2) receptors and enzymes responsible for the manufacture and disposal of endocannabinoids’.

What can CBD do for you?
As well as modulating your endocannabinoid system, CBD can also act an ‘anti-inflammatory and antioxidant agent’. These properties may do much to promote feelings of relaxation and calm, and protect against potentially toxic reactions in the body.

How do I take it?
Formulated into oil, DragonflyCBD extract is best absorbed into the body sublingually (under the tongue) and held for two minutes before swallowing. For problem areas, DragonflyCBD can also be applied topically (directly to the skin).

Covid-19: A Word From the Dragonfly Team Dear Dragonfly Community, Our number one priority is your health and wellbeing, it is at

This Sunday is International Women’s Day and DragonflyCBD have partnered with the women’s mental health charity, Wish. Hand-picked by the women of 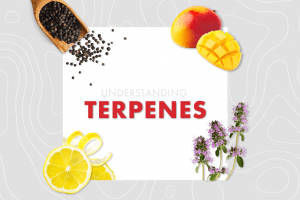 What on earth are terpenes? If you’ve spent any time engaging with the CBD boom then you’ve likely encountered the word ‘terpenes’.